Read actionable insights about Google’s launch of Google Assistant, which will integrate with Google Lens, in an effort to let Apple users embrace the full glory of Google’s ecosystem and entice them to dump Siri… 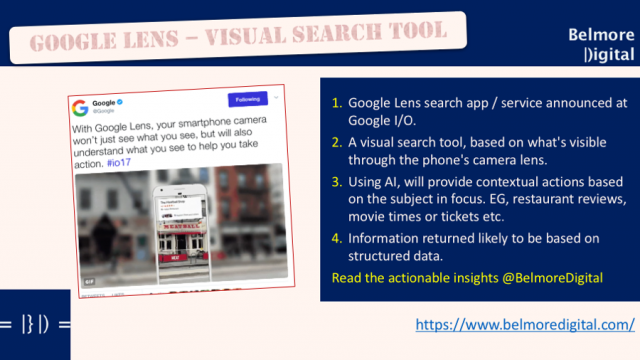 Read actionable insights to deal with Google’s Visual Search Tool – Google Lens, a rather nifty app that allows you to search for things in your mobile’s camera viewfinder and (if the structured data is right) act upon the results… 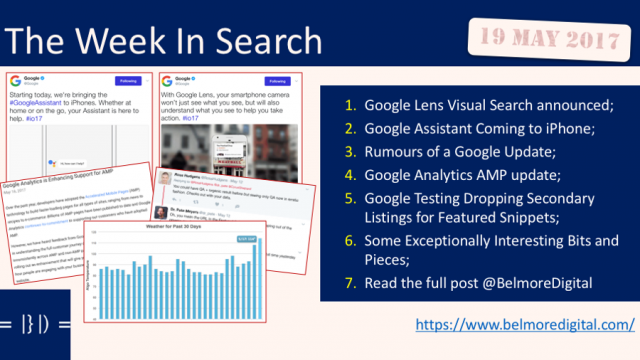 Read the TWIS SEO Update for w/e 19th May 2017 – jam-packed with actionable insights:

Find out more about the Facebook NewsFeed update combating low quality links and how to deal with it if you’re affected. From Belmore Digital: Organic Digital Marketing.

Read the 5 most important updates to SEO for w/e 12 May 2017: Pages Ranking for 1000+ Keywords; BrightEdge / SearchMetrics Patent Dispute; Adding Video Does Not Assist Rankings; Events Debut on US Mobile; How Google Crawls 404s; and a number of other interesting bits and pieces. 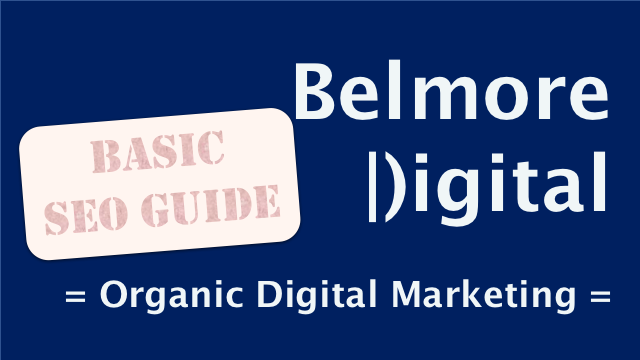 Read about the launch of Basic SEO Guides v1 from Belmore Digital: Organic Digital Marketing. Find out how to start getting the basics of SEO covered. #SEO #SEOGuides #SEOStrategy… Read More 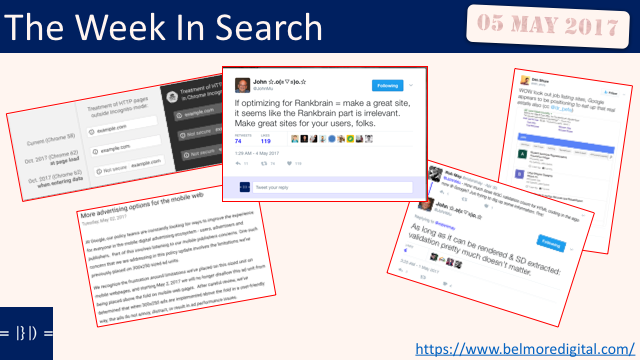 Read the 5 most important updates to organic search w/e 5th May 2017: Chrome’s Not Secure Warnings, RankBrain irrelevance to SEO, Google Job Search in the works, AdSense 300*250 ATF SEO issues and W3C Validation unimportant and a number of other interesting bits and pieces. 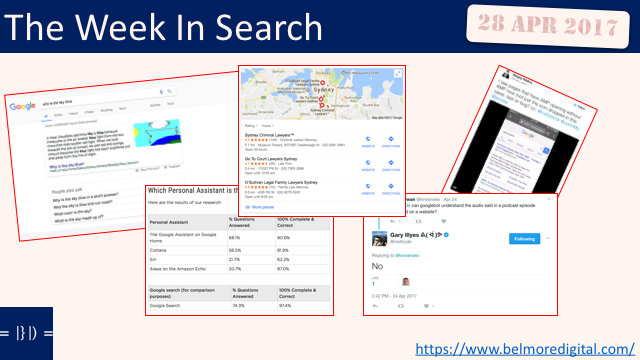 Read the 5 most important search updates w/e 28-Apr-2017: the Project Owl Fake News Offensive; Quality Filtering in the Local Pack; Google Assistant winning the battle of the PVAs; AMP disappearing from SERPs; Googlebot not listening to podcast audio; and a few further bits and pieces…

Getting BelmoreDigital.com Up The last few weeks, I have been beavering away, sorting out all the elements to launch this site: hosting, CMS (WordPress), Plugins, Theme Updates, Social Media Accounts, image sizes, fonts, analytics, schema – all sorts! It is all a work in progress, built agile rather than waterfall – key things are up… Read More

What’s happened this week? Pickings are a little thin on the ground this week Google’s mobile-first index is some way off, fact checking is hoping to overcome fake news, Siri is bigger than Yahoo or Bing on mobile, Google Customer Reviews is replacing Trusted Stores and Ask.com left its server status open for a while and a few more bits and pieces.… Read More

What’s happened this week? It’s been a fairly quiet week in organic search terms, but not in other areas, as  Google gets caught up in a storm over ads and controversial content, while it also releases Adwords Close Variants. Site hacks in 2016 were also on the agenda, tappable shortcuts got released and webmasters breathed easier as the date of the mobile-first index is… Read More

Google is having a stab at identifying  upsetting or offensive content via its Quality Raters, Google Search Console had a day of missing Google Analytics data, before squeezing organic SERPs further with 6 Google Ads at the bottom . There has also been a study that shows Chrome does not pass URLs for googlebot discovery as well as another reiteration that 404s are… Read More

So, this week, we have the joys of over-reported AMP traffic, nestled up nicely against a report about the size of AMP traffic, followed (handily) by a reminder study about mobile speed benchmarking, the sad extinguishing of DMOZ and relief for programmers who use special characters when searching Google. #GoogleAnalytics, #AMP, #PageSpeed, #GoogleSearch, #MetaTags… Read More

This week’s updates and search snippets include: a Google My Business service area update; an announcement that Google and Bing take action on UK Piracy; findings that proximity upweighted in Local Pack ; a reduction in Google Star Rating threshold and advice to use caution with using the GSC URL Removal Tool. #GoogleMyBusiness, #GoogleSearch, #GoogleLocal, #StarRatings, #GoogleSearchConsole… Read More