Wow, what an exciting bunch of stories for this week’s SEO News & Updates.

Google gave us the skinny on critical factors for the Mobile First Index.

I was relieved to find that I could edit Google My Business listings directly in search.

The Google Search Console Beta program expanded – were you included?

Google Local rolled back its Possum Update at the end of August. To the releif of some local business owners.

The SEO Bits and Pieces really delivered with a a couple of cracking nuggets on social media and links. Good reading if you ask me! 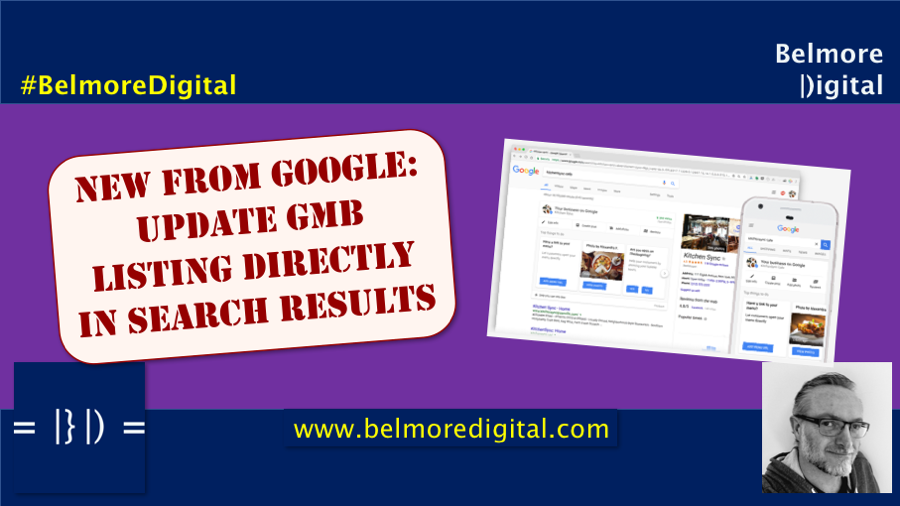 I’ve long known that if you want people to edit information to keep it up to date, you have to make it ridiculously easy for them to do so. If they face any barriers there will be a steep drop-off much like a conversion rate graphed against funnel steps.

This is a good thing from Google. It ensures it is easy for you to keep your Google My Business listing up to date and ensures Google’s listings are up to date as well.

There are a huge number of issues with Google local listings. Google has scraped them from a number of sources which has led to tremendous inaccuracies and errors. At least if Google manages to keep the verified listings accurate, we’re in with a shot of slightly more accurate results.

Google really is all about speed. AMP is supposed to be about speed on mobile, before we all transition to Progressive Web Apps, but it is also more about the issues caused by so much advertising, some much JavaScript and just so much rubbish loaded onto pages.

I’m not a particular fan of Featured Snippets. I think they steal traffic from the publisher for Google’s benefit with little to nothing in return. I also think half the time they answer only half the question, so their utility is somewhat lacking.

Fortunately, if you have an AMP variant of your Featured Snippet page, you can now have that surface in SERPs and answer half the question in half the time.

I don’t think we’re a million miles away from AMP URLs receiving a small boost in SERPs, but there still needs to be a groundswell towards it from some very big publishers and other results pages.

Google is going for it with the Beta Search Console. I have a few question marks over whether this is designed to win over the webmaster community before release, or whether it is seeking genuine feedback.

The index coverage report looks great. I really hope it lives up to expectation, but like a lot of things, I feel the report is likely to give you 50%-60% of the information you need and frustratingly leave the rest out.

Still, when it comes to Google, SEO and surfacing in the rankings, the more information from Google, the better, frankly.

Google has issues with similarity and duplication. We know that from the main organic search results. Unfortunately addresses, phone numbers, locations are (or can be) a little harder to deduplicate and disambiguate for the Local team, and there are plenty of businesses out there who are busy taking advantage of Google by claiming virtual offices as staffed offices, or opening hours that don’t exist, or keywords in the business name – all sorts of things.

Usually a rollback of a filter from Google means that it has developed some new technique or technology which allows it much finer granularity on things it should / shouldn’t filter. A while ago, Google issued a reminder re virtual offices, and there is a reasonable chance that was a business’s chance to get itself cleaned up before this change came into effect. There is also a chance is was a standard Google mumbling about playing by the rules.