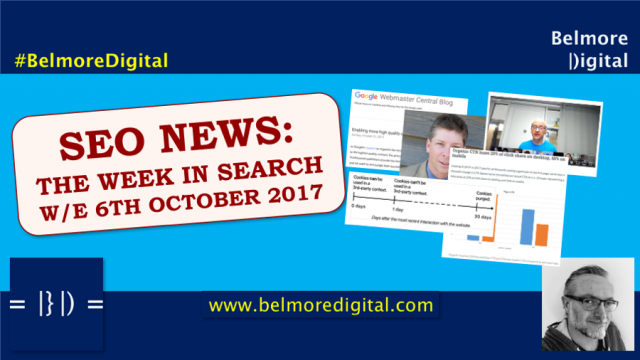 If you read the very latest SEO News and Updates for w/e 6th October 2017, you will discover the following fabulous stories, all with Key Issue Summaries, Key Actions Lists, as well as major Insights and Discussion pieces as well: 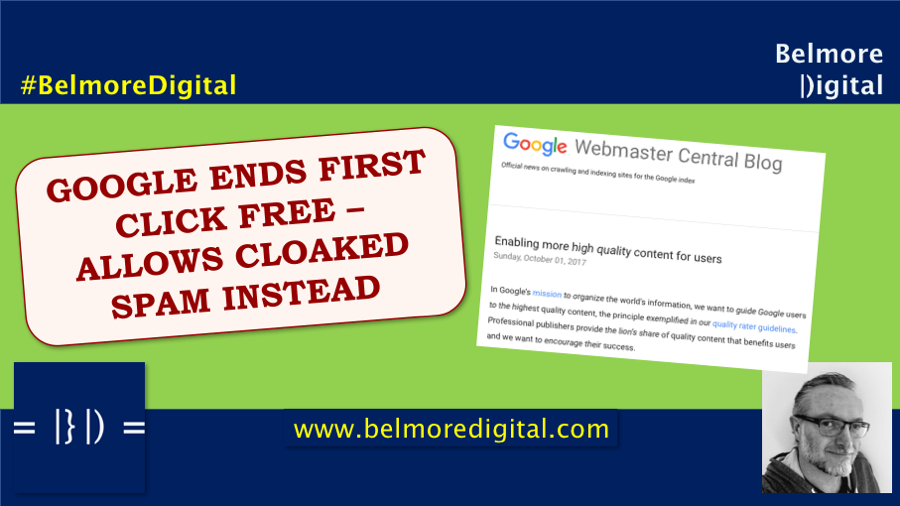 Sigh. Google is giving in to the cloaking spammers and allowing publishers to restrict access to content after a certain number of views, or only provide an introductory snippet instead. Describing this on Google’s blog as “Enabling more high quality content for users” is laughable.

This is bad for the user, and bad for Google, which really appears to be steering away from its lofty mission to index the world’s content.  In particular, I cannot reconcile this move with their statement on the mission page that they want to “maximise access to information” by making a “commitment to a free and open web”.

If publishers truly wanted to survive in the new economy, they would already have made significant changes away from their bloated and expensive infrastructure and would have brought people on board who know how to make money on the web, rather than people in fancy hats. I have been a publisher, I know acceptable profit can be made, even when you giving a lot of product away for free.

As a result of this, it probably means there will be more cloaked spam on the web with poorer search results. Publishers will struggle to implement and more content will be blocked from Google’s search results.

This may pull more publishers back to Google, who had drifted away to Facebook before discovering that is not a solution. This may also push more users to Facebook as Google’s search results become choked with cloaked spam. 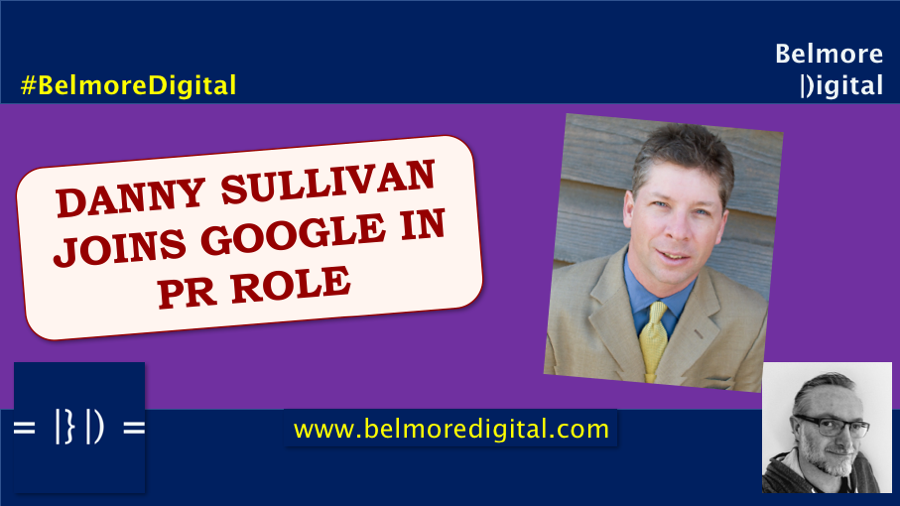 So, Danny Sullivan, erstwhile respectable spokesman of the search community, has taken the silver dollar and joined Google. This is great for him, I’m really pleased.

I’m also saddened that the expectation on Danny to be the new Matt Cutts will be vastly over-indexed. Danny is nowhere near as technical as Matt (who effectively wrote the safe content search filter, a masterful piece of linguistic & other signals sorting and engineering) . What is also clear is that Google expects Danny to perform a more PR role.

As you can see from various recent announcements, Google has adopted more of a “for your convenience” PR puff stance, which rarely works. Employing a respected industry spokesman to do the puffing is a well-worn tactic which may or may not work, depending on how long the heroic glow lasts.

I really am trying not to be cynical about this, but Google has been such a disappointment recently that I’m finding it hard not to take the view that Google is trying to schmooze all over webmasters yet again.

Of course, the guys who currently provide webmaster support and contact may not be feeling a million dollars either. 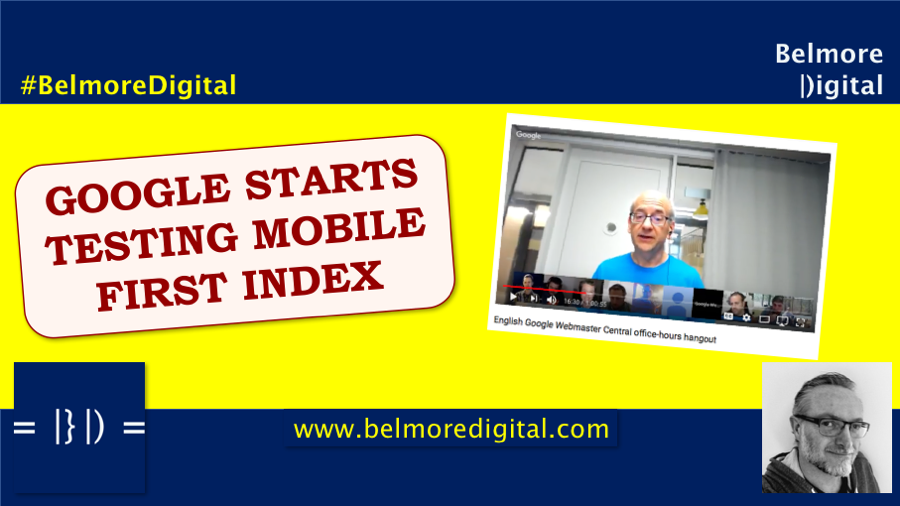 This is big news which seems innocuous. It also gives a good insight into how Google now constructs its algorithms.

The number of live search results based on mobile first indexing are not that significant, but it is still a step-change.

What is interesting is that Google is using the results as a test-bed to build their algorithms, trying to identify on the fly if mobile content is the same as desktop content. You would imagine that Google is pulling information from different indices to make this work in the search results.

This means that there isn’t a single index serving results. They are a composite of more than one index and can be interpreted, ranked and displayed on-load. Whatever way you look at it, that is a pretty cool bit of software engineering.

I do have an issue with Google using Google Search Console to communicate to webmasters. I don’t think they achieve their desired results by doing that, and they could do a lot better. I’ll blog about that. 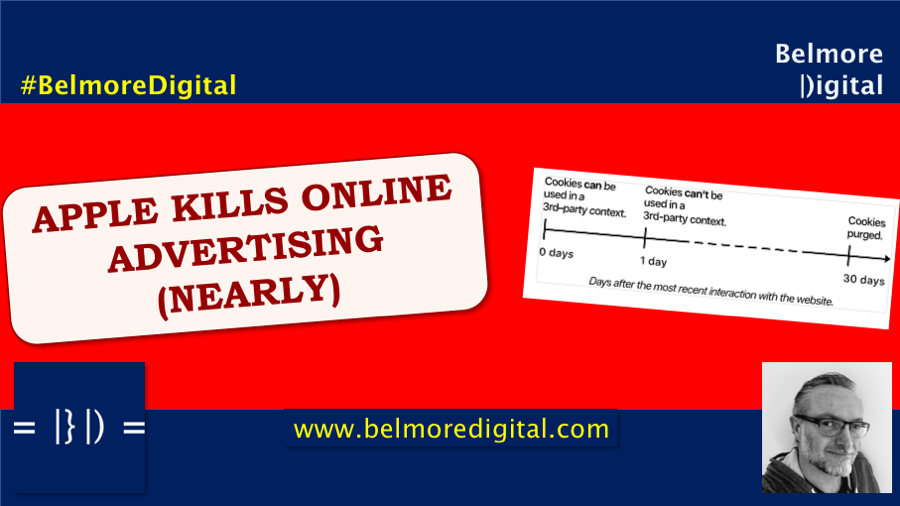 Some advertising is a scourge. Retargeting when you’ve already bought something. Following you round the internet. Or using cross-domain cookies to build detailed profiles on you for bigger, better advertising.

I don’t always think that web advertising is a bad thing. It is if people do not do it well, and just spray. The most annoying thing I think is wasted budget when I get re-advertised on a product I have already bought (from that supplier, or elsewhere), or already decided not to purchase. It is a waste of the advertiser’s time and a waste of the user’s bandwidth and screen real estate. The only beneficiary is the advertising company, who may already know that user has purchased, or made a decision. That is poor practice in my book and in my perfect world it would not exist.

Quite a few years ago the death of the cookie was widely forecast. It still hasn’t happened, but it needs to. The data companies at the time trumpeted about “browser fingerprinting”, but it seems that has not yet come to pass. I wonder what happened to it. 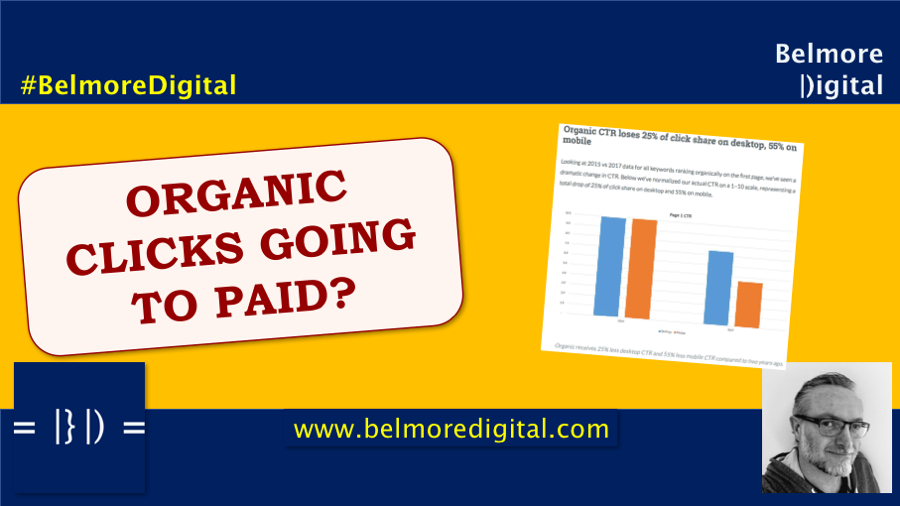 Really, for the ecommerce category, Product Listing Ads (PLAs) have taken over a large portion of search, especially on mobile. This is the main driver of the drop in organic click-through rates for this market.

It is interesting to compare to other recent reports, such as New Study Shows 20% of Google Clicks Go To Number 1, and Google Adwords CTRs Up But Paid Search Down which talk about how there are fewer click on paid search result, although CTRs are up.

Really the whole business of click through rates is a bit of a mess. There is so much other gubbins published on the SERP that it is almost impossible to aggregate properly. Really the most important metric to keep an eye on is not Organic CTR but how much traffic you actually receive from that listing and what you do with it are the really, really, important things. 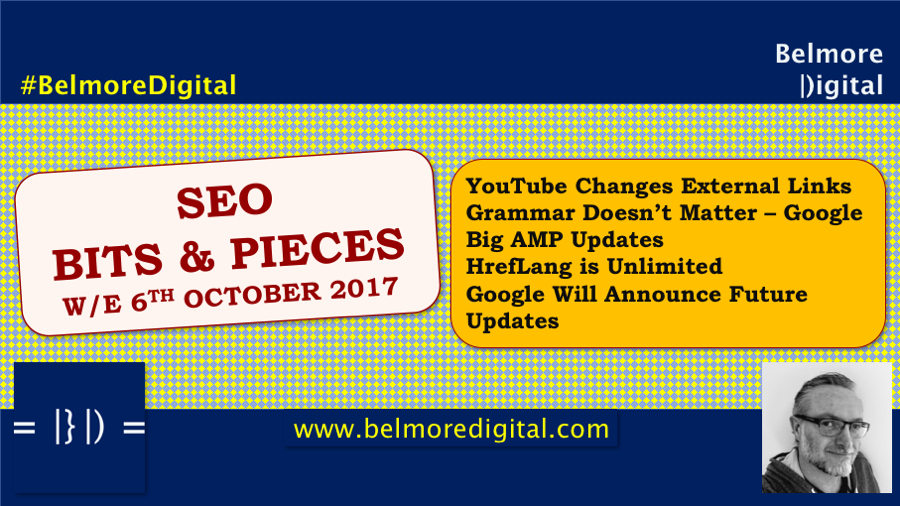